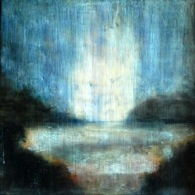 
Eerie, phosphorescent seas and skies aflame with aurora borealis seem to float in and out of visibility in the dreamlike paintings of Paula Blackwell. Using encaustic (wax-based) media, Blackwell’s vistas have the feel of semi-abstracted landscapes. In pieces such as The Shore, the artist somehow turns an expanse of cool turquoise into a field of glowing, molten lava—an effect recalling the closing moments of the “Stargate” sequence in Stanley Kubrick’s 2001: A Space Odyssey. Through Aug. 28.​ 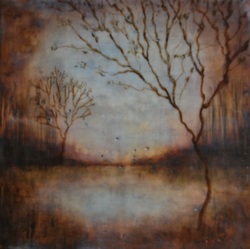 Artist Paula Blackwell creates "mysterious atmospheres" in her encaustic paintings of landscapes.
Encaustic painting on wood panel by Paula Blackwell. See Blackwell's work at RiverSea Gallery in Astoria, White Bird Gallery in Cannon Beach and Ryan Gallery in Lincoln City. Liquid pools reflect dreamy horizons in a new series of "Atmospheric Landscapes" by painter Paula Blackwell. In this series, Blackwell uses a combination of encaustic and oil on wood panels to create compelling landscapes that capture an air of mystery and timelessness. A setting moon in a moody night sky, stark white clouds on a blue sky backdrop, or alpenglow-kissed mountain summits are reflected in Blackwell's foreground waters.   There is a curious sense of familiarity in these landscapes. Where have I seen this... a dream? ...an old movie? It's that mysterious atmosphere that Blackwell purposefully plants and cultivates in her landscapes as she manipulates layers of molten pigmented wax around her canvas.   "Unlike in oil painting, my torch is my paintbrush," says Blackwell. She also uses pottery tools, dental tools and a variety of scrapers, trawls and spatulas to create visual depth and translucency.   She has been painting for 20 years, but became fascinated with encaustic painting in 2010 after seeing a fellow encaustic artist at work. Blackwell has been featured in several solo exhibitions in Pacific Northwest galleries and has participated in group shows at various venues around the country.   Her work is currently featured in several coastal art galleries, including RiverSea Gallery in Astoria, which will feature a solo exhibit of Blackwell's work this April. White Bird Gallery in Cannon Beach also carries some of Blackwell's encaustics, and an exhibit of her work will be featured during the fall Stormy Weather Art Festival that takes place in Cannon Beach in early November. You can also find her work at Ryan Gallery in Lincoln City. - by Veronica Russell 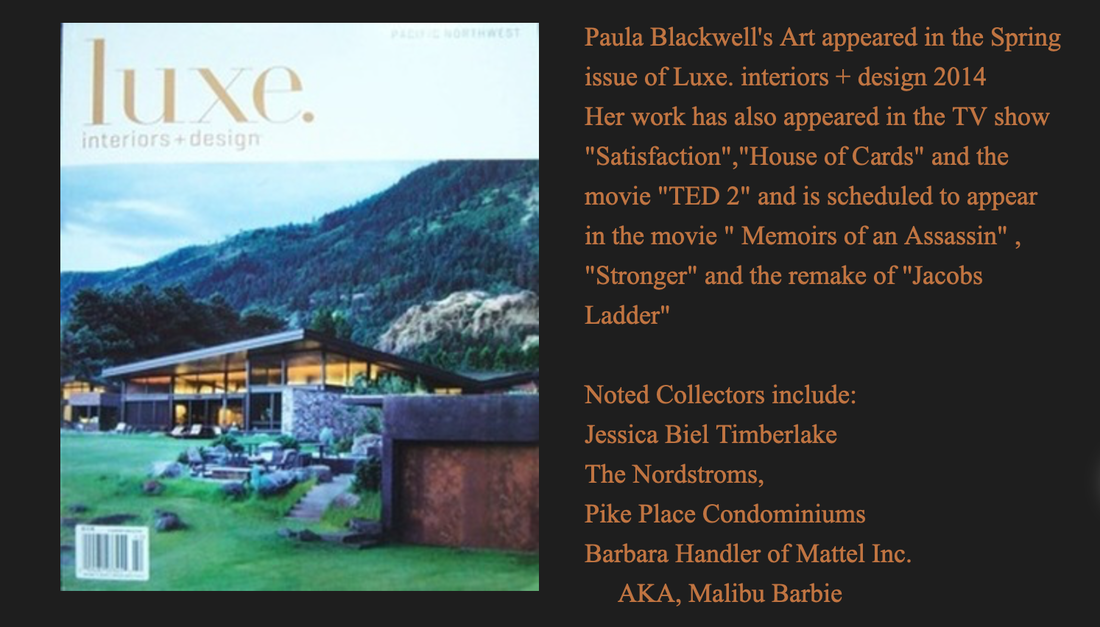 Saturday, April 3, 2021, 2-6pm Open House Reception Paula Blackwell: Out of the Blue Encaustic landscape paintings. Paula Blackwell is a leading artistic voice in the Pacific Northwest. Her emotionally charged, moody landscapes point as much towards our inner life as they do reference the natural world. Process leads the charge in her work as she manipulates layers of wax and pigment, exploiting the translucency of the materials to create a palpable sense of atmosphere, never becoming a slave to detail and illustration. Blackwell offers a vision both personal and universal - a space to explore as we seek to find our place in this world. Blackwell's work is already represented in both public and private collection in Chicago and the Midwest, as well as nationally. Addington Gallery has exhibited the work in a number of group exhibitions, but this is her first solo exhibition in Chicagohttp://chicagogallerynews.com/
Chicagogallerynews.com